The American Rescue Plan Act (ARPA) represents an unprecedented financial stimulus for Colorado at all levels of government.

Signed into law in March, the coronavirus relief bill funds myriad health and economic priorities. The Colorado Health Institute (CHI) has created this financial map to track the funding as it moves from Washington to Colorado and throughout the state. The map tracks some $9.7 billion in federal funding for the state and its political subdivisions.

This map includes only funding from ARPA. It excludes previous stimulus legislation related to the coronavirus pandemic. The map tracks funding only for government entities, institutions such as school districts and colleges, and health care providers. It does not include payments to individuals or non-health care businesses, such as stimulus payments, unemployment benefits, Affordable Care Act insurance subsidies, and Paycheck Protection Program loans.

The purpose of this map is to identify stimulus funding for which state or local policy decisions must be made. For example, the Loveland City Council must decide how to spend its $9.5 million in ARPA money, and Pikes Peak Community College has $13.8 million to put toward its institutional priorities.

The largest sum is the $3.8 billion stimulus under the purview of the Colorado state legislature. But CHI has identified an additional $6.1 billion that is earmarked for other entities in the state and bypasses the legislature.

This financial map traces the money sent from federal agencies to receiving agencies in Colorado. A later iteration will trace where funds flow from those receiving agencies. Most decisions about the funds’ ultimate use have not been made yet as of early July. 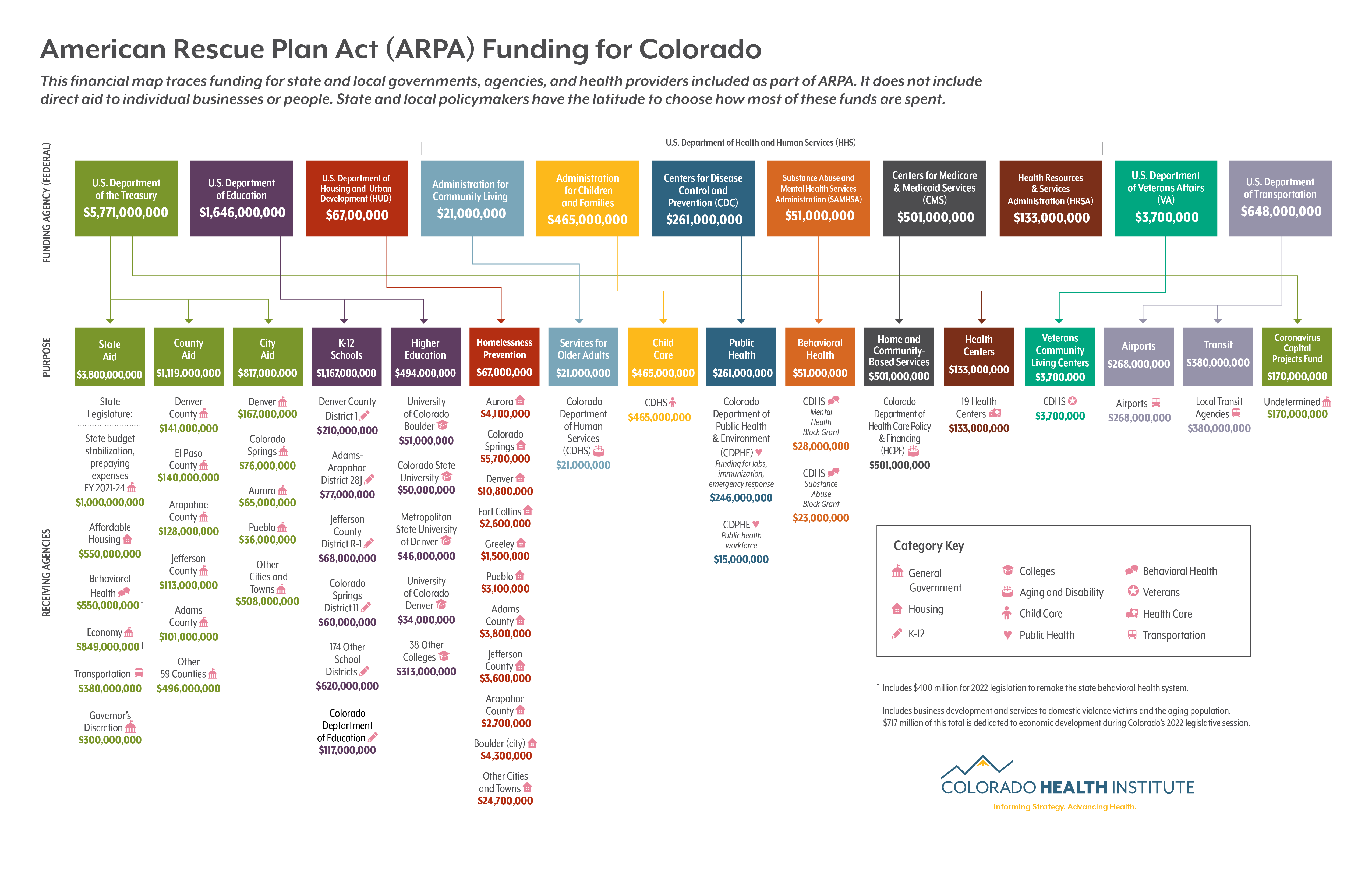 Ways of Reading the Map

Congress set broad categories of spending allowable under ARPA, such as supporting state budgets, school districts, or public health departments. Federal agencies refined the rules by issuing guidance throughout the spring of 2021.

State agencies and local governments have to pay attention to rules from multiple federal agencies. For example, the City and County of Denver must follow the Treasury guidance for its general funding, Housing and Urban Development guidance for homelessness prevention, Federal Aviation Administration rules for Denver International Airport, and Federal Transit Administration guidance for bus and rail funding.

Recipient governments, agencies, and organizations have the power to make decisions about how to use the funds, within the bounds of federal guidance. While the legislature controls the single largest pot of money, various state agencies, 64 counties, hundreds of cities and towns, 178 school districts, and more than 40 colleges also are receiving direct allocations.

The funding is a windfall for each of these entities individually. But a greater opportunity lies in the potential for cooperation across agencies. For example, county, school district, and state funding could be coordinated to improve a community’s access to mental health care.

General governmental funding for cities, counties, and the state represents the largest area of funding, followed by K-12 education. Other focus areas include child care, colleges, transportation (mass transit and airports), and aging and disability services (mostly through $500 million in funding for Medicaid home and community-based services).

Most decisions about how state and local government funds will be spent have yet to be made as of July 2021. However, Colorado’s legislature made some preliminary decisions about spending priorities during the 2021 legislative session. Lawmakers set aside about $850 million for economic development and $550 million each for behavioral health and affordable housing. Those decisions are reflected in the financial map. The legislature will choose specific programs to fund within those categories in 2022 after getting input from special committees that meet over the summer and fall.

This financial map outlines the distribution and focus of nearly $10 billion in one-time federal funding for Colorado through ARPA. This extraordinary influx of funds will do the most good if it is deployed strategically to create transformational change in the lives of Coloradans and the systems that serve them.

ARPA is only part of the picture when it comes to new funding available or soon-to-be available to Colorado governments, programs, and initiatives. Congress passed separate stimulus bills in 2020, and it is considering a large infrastructure bill this summer. Settlements in state and local government lawsuits against opioid manufacturers are also on the horizon — another potential funding source for Colorado governments and programs, especially those focused on health. Knowing where these funding streams lie and what they support is the first step toward using to improve health and well-being for Coloradans.

Director Joe Hanel communicates CHI's work to a broad audience, including news reporters, legislators, health advocates, and voters. He also performs research and analysis on the intersection of politics and policy and the interaction of federal and state health policy.