A Dose of Reality: Prescription Drugs in Colorado

Prescription drugs are an essential part of medical treatment and ongoing management of health conditions, from antibiotics that treat infections to lipid-lowering drugs that manage high cholesterol. However, filling a prescription can be a challenge if patients lack insurance coverage or face high prices for refills.

Over the past decade, increases in the retail price of many prescription drugs have substantially outpaced inflation. For example, between 2019 and 2020, the retail prices for 180 specialty drugs widely used by older Americans increased by an average of 4.8% compared to the general inflation rate of 1.3%.(1) Price increases are so common that between 2019 and 2020, the price of half of all prescription drugs covered by Medicare increased faster than inflation.(2) 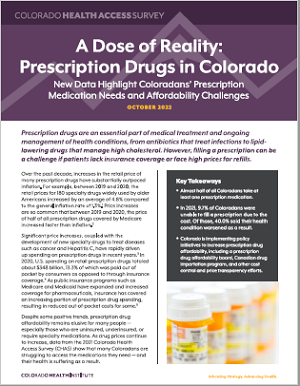 Significant price increases, coupled with the development of new specialty drugs to treat diseases such as cancer and Hepatitis C, have rapidly driven up spending on prescription drugs in recent years.(3) In 2020, U.S. spending on retail prescription drugs totaled about $348 billion, 13.3% of which was paid out of pocket by consumers as opposed to through insurance coverage.(4) As public insurance programs such as Medicare and Medicaid have expanded and increased coverage for pharmaceuticals, insurance has covered an increasing portion of prescription drug spending, resulting in reduced out-of-pocket costs for some.(5)

Despite some positive trends, prescription drug affordability remains elusive for many people — especially those who are uninsured, underinsured, or require specialty medications. As drug prices continue to increase, data from the 2021 Colorado Health Access Survey (CHAS) show that many Coloradans are struggling to access the medications they need — and their health is suffering as a result.

The State of the State on Prescription Drugs

According to the CHAS, which was fielded from February through June 2021, 2.7 million Coloradans of all ages take at least one prescription medication. That’s 47.2% of the state’s population. Many of these Coloradans face issues affording their medication, with 12.7% of adults who take prescription drugs, or roughly 304,000 people, reporting that they have a somewhat difficult or very difficult time affording their prescriptions.

Findings from the CHAS offer insight into the experience of Coloradans who take prescription drugs by showing who struggles the most to afford their medications and highlighting the implications of forgoing medications, especially due to concerns over the cost. Uninsured populations and those at lower income levels are particularly vulnerable to struggling with high prescription drug costs, leading to skipped medication doses and worse health outcomes.

Fortunately, new legislation on both the federal and state levels is poised to bring savings to prescription drug users. The recently signed Inflation Reduction Act has broken a long streak of policy inaction on prescription drugs at the federal level and promises to substantially lower drug costs for Medicare beneficiaries by allowing the program to directly negotiate drug prices, which it has been barred from doing since Medicare Part D (the prescription drug coverage program) was created in 2003.(6) Several affordability initiatives in Colorado will also take hold in the next few years, including the new Prescription Drug Affordability Board that will establish and enforce upper payment limits on unaffordable prescription drugs.(7)

Download this report to read more about the state's policy initiatives and the Prescription Drug Affordability Board.

While nearly half of Coloradans of all ages report taking at least one prescription medication, prevalence increases with age. As people grow older, they are more likely to develop chronic health conditions that need to be managed with medication. Among older adults ages 65 and above, more than four in five take at least one prescription medication (see Figure 1). The rate of prescription drug use for all Coloradan adults over the age of 18 is 56.6%; this is slightly lower than the national rate of 62%.(8) 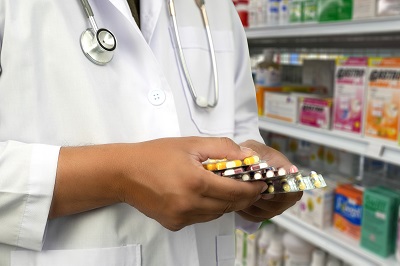 Insurance status plays a key role in access to prescription medicine. Only 20.7% of uninsured Coloradans report taking prescription medication, well below the state average of 47.2%. Those without insurance are more likely to struggle with accessing other kinds of care as well, from primary care visits to dental services.

Medicare recipients, on the other hand, have the highest rate of prescription drug use at 88.9%. This is associated with the fact that most Medicare enrollees are older adults and that Medicare beneficiaries have high rates of prescription drug coverage.(11) Other insured groups, such as those with employer-sponsored insurance, Medicaid, or Child Health Plan Plus (CHP+), take prescription medicine at rates closer to the state average (see Figure 2).

Additionally, national data suggest that 38% of adults who use prescription drugs take at least four prescription medications, likely indicating the presence of co-occurring health issues.(13) Although taking multiple prescriptions is necessary for some people, it poses its own set of challenges. Multiple prescriptions can be difficult to manage and expensive to refill, especially for people with less access to providers and pharmacies, such as those who are homebound or live in rural areas. 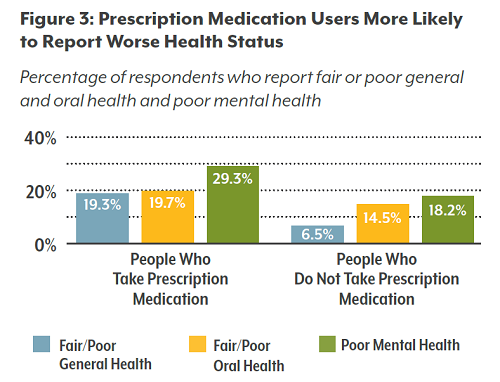 This difference could partly be due to affordability improvements for low-income Coloradans under Colorado’s Medicaid expansion in 2014. Studies show that states that expanded Medicaid saw larger declines in uninsured rates among prescription drug users than states that did not expand Medicaid and that previously uninsured prescription drug users benefitted from significant cost-savings under Medicaid.(17, 18) To date, 38 states and Washington, D.C., have expanded Medicaid, whereas 12 states have not.(19)

The ease with which people can afford prescription drugs depends heavily on their insurance status. Since 2015, the uninsured rate in Colorado has stayed relatively low at around 6.6%; however, this group of uninsured Coloradans faces persistent challenges with access and affordability. Nearly half (49.8%) of uninsured Coloradans who take prescription drugs report difficulty affording their medication (see Table 1).

Coloradans with Medicaid or CHP+ also report affordability challenges, with 19.1% of those enrollees who take prescription drugs saying they struggle to afford medications. However, unlike Coloradans with individual-market or employer-sponsored insurance, prescription drug costs for Coloradans with Medicaid or CHP+ are relatively low. Copayments for prescription drugs for Medicaid members are capped at $3 per refill, and some members qualify for $0 copayments, including children and pregnant women. All Medicaid members are exempt from copayments once they exceed their monthly copayment maximum, which is 5% of monthly household income. Additionally, pharmacies are directed to dispense medication to members who request a refill even if they are unable to afford the copayment.(21, 22) CHP+ also has low prescription drug copayments that are based on an individual’s income level and are capped at $15 per refill.(23) 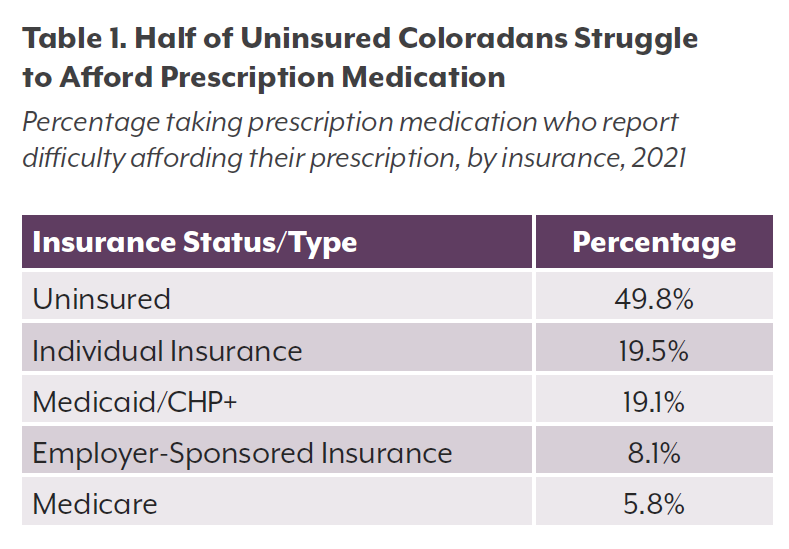 Going Without: Factors Associated with Skipping a Prescription

With high prescription drug prices and other affordability challenges, many Coloradans are forced to choose between their medications and other expenses, such as food, transportation, or housing. Over 540,000 Coloradans (9.7%) report not filling a prescription due to cost in the past year — more people than live in Colorado Springs. This figure has stayed consistent over the past six years, demonstrating a systemic issue with prescription affordability amid rapidly rising drug prices and other consumer cost pressures. An additional 222,000 Coloradans report not filling a prescription due to some reason other than cost. Although the CHAS does not specifically ask why, other reasons might include inconvenience or fear of medication side effects. 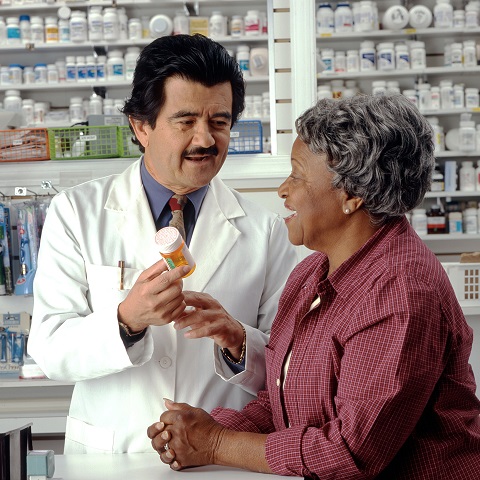 Similarly, insurance status plays a large role in the ability of Coloradans to fill their prescriptions. The uninsured were the most likely miss medications, with one in four (25.3%) uninsured Coloradans reporting not filling a prescription due to cost, compared to just 9.6% of Coloradans with any type of insurance.

Of those who said they were unable to fill a prescription due to cost, 40.0% indicated that their health condition got worse as a result of forgoing the medication. Skipping prescription medication can have serious health implications. For example, a national study showed that adults with cardiovascular disease who missed filling their medications due to cost experienced higher rates of chest pain, nonfatal heart attacks, and strokes.(28)

Many Coloradans cannot access or afford the prescription drugs they need to be healthy. The scope of the problem for Coloradans — even those with insurance coverage — indicates an urgent need for solutions.

Read the full brief to learn about the legislature's efforts to make prescription drugs more affordable.

Although significant policy and structural barriers remain, Colorado is on the leading edge nationally in taking actions to address these challenges.