When I drove down Poudre Canyon in late July, I saw traces of the Cameron Peak Fire all around me.

It was an increasingly familiar sight of ghostly, burned trees and non-existent vegetation left over from another one of Colorado’s increasingly large, intense wildfires. Farther down the canyon, the river, opaque with mud, surged over and around the roof of a house swept away in a recent flash flood. The river churned with debris — fragments of disrupted lives floating down toward Fort Collins.

Burn scars from Colorado’s historic 2020 wildfire season are vulnerable to destructive floods and mudslides because of the drastic changes to the landscape that occur during a fire. These events created road closures and travel delays for Coloradans traveling west along the I-70 corridor and along Highway 14 in Larimer County, where large wildfires occurred less than a year earlier.

Flash floods are common and can occur nearly anywhere in Colorado, causing injuries or death with little warning. But Coloradans who live or play near burn scars are at increased risk for future flooding. These communities must contend with the direct health effects associated with floods, such as drowning or emotional stress, as well as a myriad of social consequences including the disruption of transportation, communication, and business

Amid the doom and gloom, there is good news for Coloradans. Local governments and public health agencies have emergency plans in place to prepare for flooding events, and communities around the state are improving their efforts to raise awareness about flood safety and post fire flooding events.

Climate change has a compounding impact on Colorado’s environment. Newly charred trees and blackened mountainsides from recent wildfires create the perfect conditions for floods and mudslides.

The year 2020 was the worst wildfire season in Colorado history. Four of the largest fires ever recorded in the state burned almost 600,000 acres of land, caused a series of community evaluations, and resulted in two deaths. Colorado’s Poudre Canyon, Glenwood Canyon, and parts of Grand County that experienced some of the worst destruction from the fires have seen a summer of unpredictable road closures and property destruction due to fast moving mudslides and floods. It takes only a modest rainstorm to trigger these flood-after-fire events because a burn area’s soil and vegetation are unable to absorb enough water during a storm. These floods are much more common than the 2013 floods, a once in a century event that wreaked havoc on Front Range canyons.

Flash Floods, Mudslides, and Your Well-Being

Flash floods can occur in both flood-prone and non-flood prone communities, from downtown Denver to Glenwood Canyon. Flooding events that become mudslides create danger in canyons, where water can move at high speeds downhill with debris and rocks.

Immediate health dangers, such as emotional stress, electrocution, or drowning, can occur during and after flooding events as people encounter fast-moving or standing water. (See Figure 1.) But there are also large social consequences of flooding events for communities and individuals. Normal life is disrupted by damaged roads that cut off access to jobs or school. Power outages and broadband lapses reduce people’s ability to communicate. And damage to homes, businesses, schools, or health care facilities can inflict physical, mental, and economic distress. 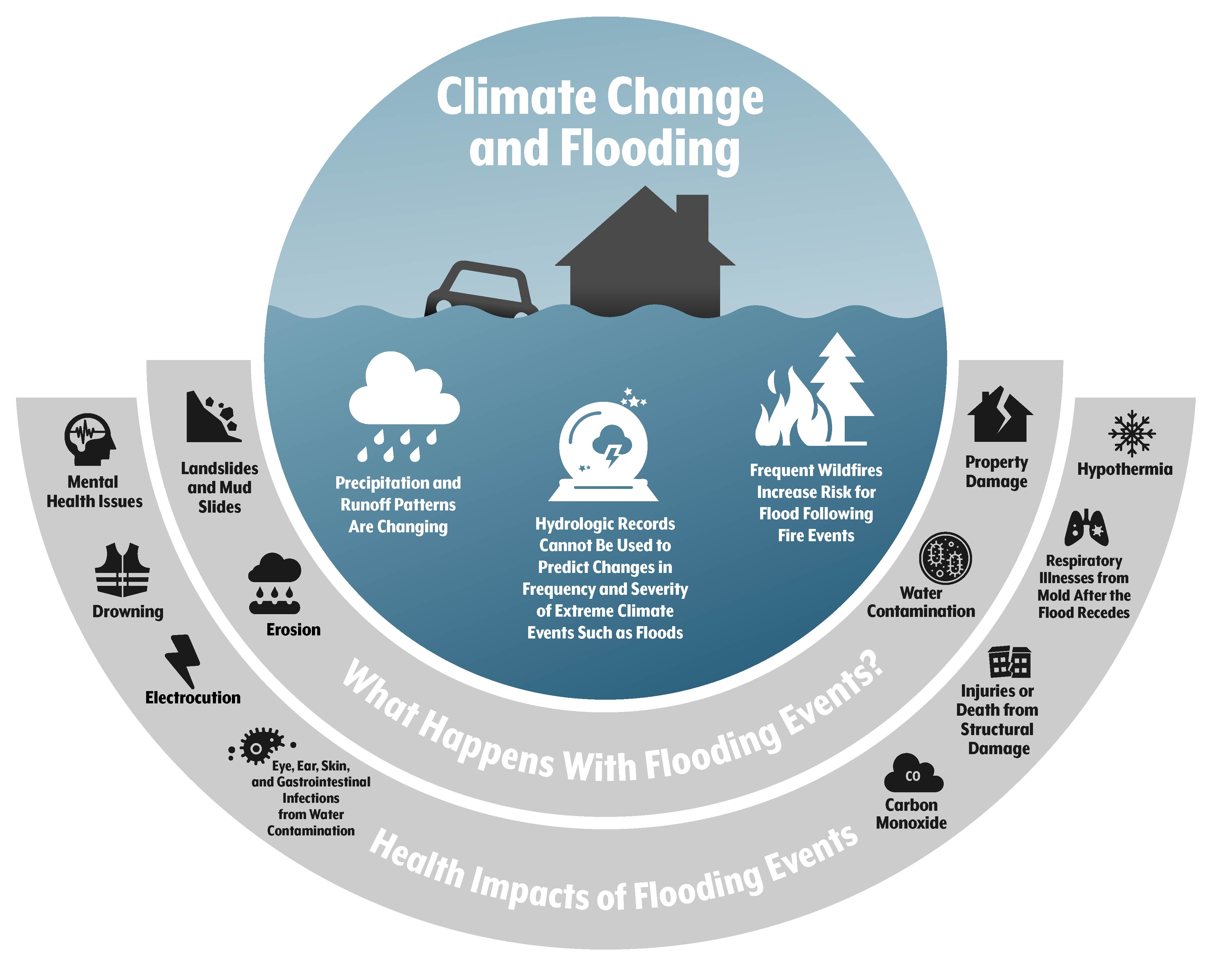 Flash floods are, and will continue to be, a common event in Colorado, especially in areas near a wildfire burn scar. Ongoing preparedness efforts are needed at the individual, community, and public health-level to mitigate the risks.

Emergency preparedness plans, which include natural disaster procedures, are available for all 64 counties and most cities in Colorado. Complementary to these county-wide plans, public health agencies are raising awareness among community members about the many dangers of flooding events. For example, the Colorado Health Institute worked this year with Clear Creek County’s public health department to implement the Centers for Disease Control’s Building Resilience Against Climate Effects (BRACE) framework and create flood trainings tailored for county employees and community members.

Clear Creek County and CHI created interactive trainings that outlined the connection between climate and health, then used scenario-based activities, worksheets, and group brainstorms to teach best practices for community and individual-level actions before, during, and after a flooding event. The county also used the grant money to hand out flood safety buckets to residents, which included items such as first aid kits, emergency blankets, and flashlights.

Safety Tips for Before, During, and After a Flood

Flash floods and mudslides will continue to create high-risk situations in Colorado as the effects of climate change continue to arrive at our front door. Adaptation to a warming planet must become a priority of public health work — starting now, not years in the future. Much of the hard work will fall to local leaders, with the state and federal governments playing a supporting role.

Fortunately, Colorado is home to local leaders who recognize the imperatives of climate change. Counties like Clear Creek show how even small communities can take immediate action to protect their residents and way of life.