About one in seven Coloradans — 15.1%, or 620,000 people — reported “sometimes” or “often” experiencing unfair treatment when getting medical care at some point in their life, according to data from the 2019 Colorado Health Access Survey (CHAS).

The impacts of being unfairly treated are far-reaching. Unfair treatment is associated with increased stress and poor health outcomes. Similarly, past experiences of unfair treatment can influence future decisions on whether to seek needed care.

Understanding these disparities is critical to ensuring that all Coloradans have access to equitable and fair treatment and can pursue needed care without fear of discrimination.

This brief focuses on the following guiding questions: 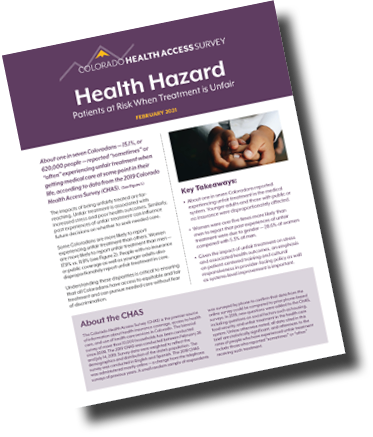 Discrimination in health care settings is associated with poor health outcomes. Coloradans in fair or poor health were three times as likely to say they had been treated unfairly sometimes or often as those in good, very good, or excellent health (32.6% to 11.4%). Similarly, 34.2% of Coloradans who reported poor mental health also said they were treated unfairly sometimes or often, compared with 10.6% in good mental health.

Multiple studies reflect the disparity shown in the CHAS data. For example, women with the same symptoms as men wait longer for care and spend
less time with providers. Women also are more likely to be misdiagnosed with mental health problems and are consistently prescribed less pain-relieving medication. Studies show that women interface with the health care system more than men and seek out care more often. This is due to a variety of reasons such as taking on the role of primary caregiver in the home for children and elderly family members.

Age Is an Issue, but Gender Disparity Persists

This may reflect shifting expectations and awareness. It is possible that younger Coloradans are more sensitive to — and educated about — discrimination in all settings, including health care. This awareness can come from a variety of areas. Today’s younger adults, for example, pursue higher education more than their parents and grandparents, and the proportion of young adults with bachelor’s degrees or higher has continued to increase. Exposure to higher education also means exposure to more diverse people. Students of color made up just 29.6% of undergraduates in 1996. This percentage increased to over 45% in 2016 and is continuing to grow.

Because of this greater exposure to diversity, younger adults may also be more likely to recognize discrimination and speak out against it. A recent study surveyed more than 150,000 millennials (24- to 39-years-old in 2020) and found that this group is more interested in causes and social issues related to the quality of life for all people. Millennials are more willing to speak out against injustice on behalf of those who are historically disenfranchised. When compared with previous generations, they are more likely to see themselves in those who do not necessarily look like them, possibly due to increased exposure to diverse communities.

This may reflect the nature of the types of health care services younger women of childbearing age are seeking — specifically sexual, obstetric, and other reproductive health services. The literature documents double standards in attitudes toward the sexuality of men and women, especially younger women. These double standards may contribute to women reporting unfair treatment because of their gender.

The CHAS questionnaire includes questions about gender identity. However, this analysis does not include nonbinary or transgender individuals due to insufficient data and sample size. However, experiences of stigma and discrimination in health care settings are pervasive among transgender and nonbinary patients and should be highlighted.

The experiences of transgender and nonbinary people are understudied. This is due in part to the same obstacles posed by small sample sizes experienced in this analysis. Nevertheless, the amount of literature is steadily growing and indicates that transgender people often report experiences of stigma and/or discrimination in health care settings.

Research has found that while experiences of discrimination in health care are not identical across transgender and nonbinary people seeking care, the impact of such experiences on those who experience them is significant. For example, one study found that over 30% of transgender study participants delayed or did not seek needed health care due to prior discrimination. In addition, when respondents interacted with providers who they perceived lacked knowledge about the transgender experience and/or health, they were more than four times more likely to delay needed care.

Insurance Status and Ability to Pay

Insurance status can serve as a proxy for overall socioeconomic status. In other words, these data could reflect unfair treatment and perceived ability to pay. A person is more likely to go without insurance, for example, if they work in an occupation or an employment sector that is less likely to provide full benefits and/or if they have an income that’s too low to purchase health insurance.

Coloradans cited a range of reasons for the unfair treatment they reported experiencing in the past. More than 17% of Coloradans cited race or skin color, 20.9% cited gender or sex, and 21.5% cited having a disability. However, the top reported reason for unfair treatment was age — of those who reported “sometimes” or “often” being treated unfairly, 32.6% shared that age was the reason why (see Figure 5).

The proportion of women who cited age as a reason was even higher. Colorado women were more likely to report “sometimes” or “often” experiencing unfair treatment because of their age compared with men (39.6% and 22.6% respectively) (see Figure 6).

Even more striking, women were over five times more likely than men to report that past experiences of unfair treatment were due to gender —28.6% of women compared with 5.3% of men (see Figure 5). These data are significant and in line with literature suggesting that women are less likely to receive adequate time with physicians and/or are ignored despite frequent requests for care. A repeated theme found in these studies is the consistent dismissal of women’s health care needs.

One of the most likely reasons for forgoing care due to unfair treatment is to avoid the stress associated with discriminatory experiences. Of those who reported “sometimes” or “often” being treated unfairly, 94% reported experiencing some level of stress, with over 40% describing the experiences as “extremely stressful” (see Figure 8).

This is significant given the impact of stress on other health outcomes. Stress can contribute to increased heart rate, high blood pressure, and other problems and is linked to mental health issues such as anxiety and depression.

Addressing unfair treatment in the health care system will require engagement at multiple levels of policy and community. From upstream solutions such as educational reform to incentive programs that center on cultural responsiveness, there are many opportunities to begin to chip away at discrimination within society’s health care structures.

While experts often recommend training as the main proposed solution for bias and discrimination in health care, it is important to consider the full career progression of physicians. Instead of waiting until an incident brings about a need for bias training, emphasizing cultural responsiveness in the medical school application process and throughout the training of medical students would facilitate earlier adoption of critical skills. Studies have found significant and positive changes in attitudes toward lesbian, gay, bisexual, transgender, queer, intersex, and asexual (LGBTQIA+) patients following intentional training to promote more positive medical student or provider attitudes toward patients, particularly when training materials incorporate patients’ input.

Too often the only opportunity for those who have experienced unfair treatment to share that experience is retroactive reflection through surveys like the CHAS. By creating additional secure forums for honest feedback, patients will be able to more frequently flag areas needing improvement and identify better access channels for resolution. Real-time data allow for real time changes. Implementing ombudsman programs in health care settings that focus specifically on unfair treatment could provide a needed safe forum for this kind of feedback. Studies show that ombudsman services are particularly necessary when individuals have unique needs, a natural power differential exists, and/or the system of care is complex. Given the relationships patients have with providers, the complexity of the health care system, and the social weight of certain identities, the impact of such a program could be significant.

As the health care landscape shifts increasingly to value-based payment systems — a form of reimbursement that ties payments for care to the quality of care — redefining the meaning of value can emphasize and incentivize cultural responsiveness. The recent focus on innovation and value-based care has centered on delivery system reform which, though important, does not directly pinpoint the root cause of unfair treatment and how it presents itself and affects patients. Tying value and quality to indicators of cultural responsiveness would reward health care professionals for taking intentional steps toward providing equitable care for all patients. The Colorado Department of Health Care Policy and Financing (HCPF) is currently investigating new ways to emphasize cultural responsiveness and health equity. HCPF hired a diversity, equity, and inclusion manager who will lead the charge in implementing cultural competency trainings for providers participating in value-based payment primary care programs. The department is also exploring new Alternative Payment Model measures that address racial disparities, such as ensuring better race/ethnicity data collection and measures aimed at mitigating potential language barriers.

Who’s Missing From This Analysis?

The CHAS asks respondents for demographic information, including race, ethnicity, and gender identity. This brief does not include an analysis of unfair treatment among LGBTQIA+ Coloradans because of this sample size issue. But there is no question that communities of color and members of the LGBTQIA+ community have long had to navigate systems that are inextricably rooted in racist, heteronormative, and sexist structures.

Patients who seek care and belong to one or more marginalized communities regularly confront physicians or others in the health care system who may or may not be explicitly biased, but who operate in an inherently discriminatory system. Although the present data cannot contribute to quantitative analysis of these specific categories, it is indisputable that throughout the history of this country nondominant racial, ethnic, disability, and sexual identities have experienced unfair and discriminatory treatment when seeking medical care. Readers are urged not to review this brief separate from this history and context.

All Coloradans should be able to access needed health care without the fear of discrimination or bias. And the fact that 94.1% of those who reported unfair treatment experienced some level of stress from the encounter shows that these experiences have direct negative impacts on the health of Coloradans.

The road toward a more equitable health care landscape is by no means easy or clear, but raising the issue is a first and necessary step. By dedicating resources to and encouraging engagement with this issue, Colorado can continue to strive to improve the health of all communities.