We all want to be healthy as we age, but not all Coloradans experience aging the same. Older adults who identify as a race or ethnicity other than white report worse health outcomes and greater barriers to health care and social supports.

The disproportionate number of COVID-19 infections and deaths among both older adults and people of color has been noted frequently in headlines since the spring of 2020. But less attention has been given to the intersection of these populations, older adults of color.

Older Black, Hispanic/Latinx, Asian, American Indian/Alaska Native, and multiracial Coloradans are at a greater risk of dying due to health inequities, such as disproportionate rates of underlying health conditions like asthma or diabetes.  A long history of discriminatory policies and racism are behind these systemic health and social inequities.

Data from the 2019 Colorado Health Access Survey lay bare the health inequities that aging Coloradans were facing prior to the COVID-19 pandemic.

A Word About Racial and Ethnic Data

In 2019, people of color ages 65 and older were more likely to report fair or poor overall, mental, and oral health status.

Poor health outcomes can be influenced by a number of factors in a person's physical and social environment, such as the availability of community resources, employment opportunities, and neighborhood safety. These factors, also known as the social determinants of health — combined with and influenced by decades of inequities in housing, economic, and health care policies — have created fewer opportunities for people of color.

People of color in Colorado were more likely to have lower incomes than white people in 2019. Coloradans who have incomes at or below 100% of the Federal Poverty Level (FPL) are three times more likely to report fair or poor health.

Having a lower income increases the likelihood of living in neighborhoods with greater safety hazards, such as violence or exposure to unhealthy air. Income disparities also influence a person’s ability to pay for health care, an expense that becomes more costly with age. 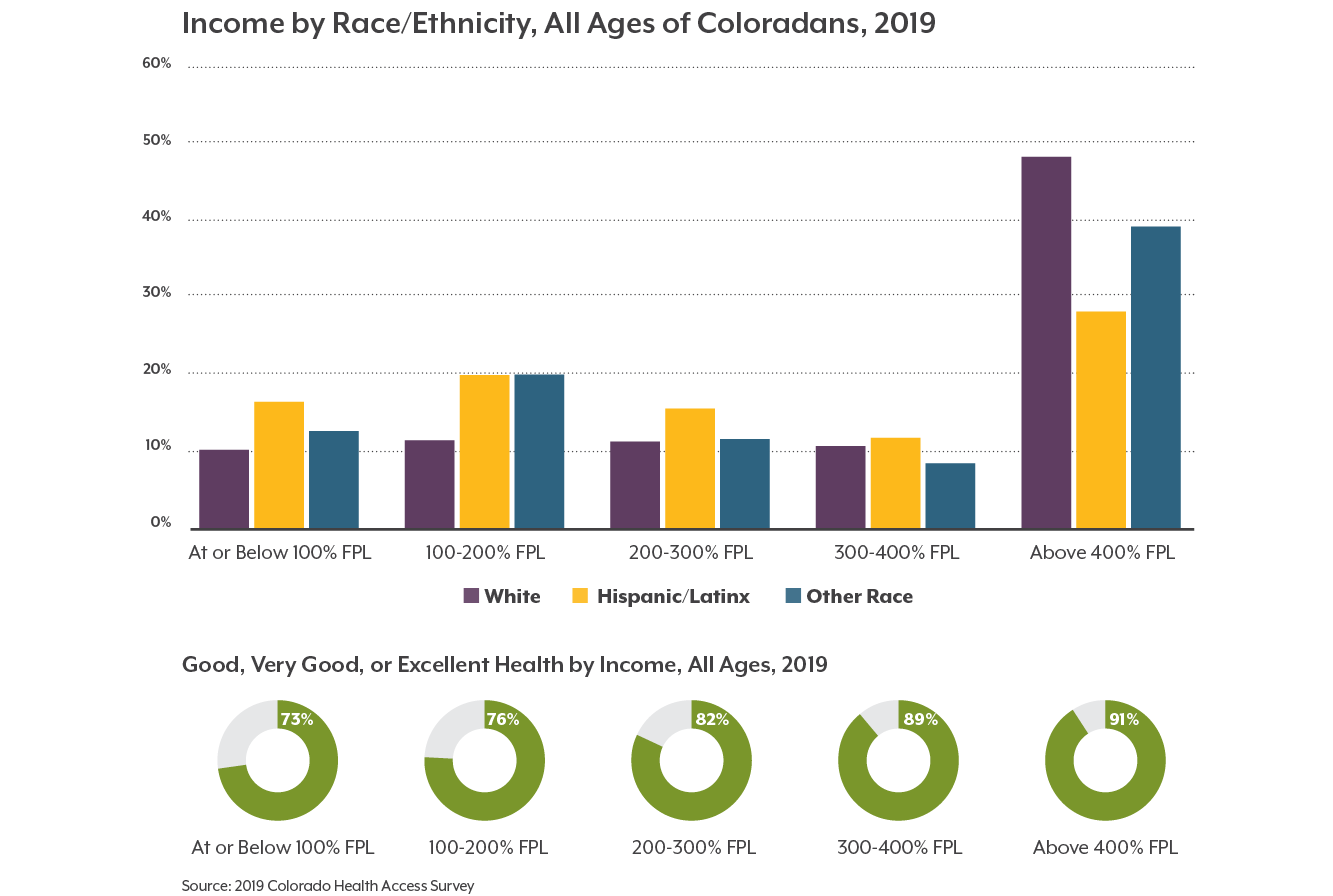 In 2019, 10% of people of color ages 65 and up in Colorado reported that they were worried that in the next two months they may not have stable housing, compared with 6% of white Coloradans. Coloradans who report unstable housing are almost four times more likely to report a fair or poor health status compared to people with stable housing.

Inequitable policies affect where people live. For example, historic housing policies such as redlining, a practice that explicitly labeled communities of color as “high risk” for bank loans from the 1930s to 1960s, made it difficult for people of color to own homes. A majority of communities that were redlined over 50 years ago are today more likely to be comprised of people of color who have low incomes and are renters. Housing instability is more common among renters than homeowners.

Access to affordable healthy food is associated with better health outcomes. However, people of color are more likely than white people to live in areas with limited access to supermarkets or stores that carry affordable and nutritious food, also known as food deserts. Food deserts are more common in rural areas and communities of color due to factors such as transportation and income disparities described earlier in this report.

Older adults of color were three times more likely to report not seeing a doctor compared to their white peers. Additionally, about one in three (34%) older adults of color did not a see a dentist in the past year compared with one in four (24%) older white adults. Coloradans who did not visit a general doctor or dentist in the past year reported higher rates of fair or poor overall health.

A lifetime of systemic racism and chronic discrimination has led to people of color bearing an unequal burden of poor health outcomes. Racial/ethnic health disparities affect opportunities for older adults of color to fairly access health care, health insurance, affordable food, and stable housing in Colorado. These disparities have likely contributed to the disparate outcomes of the COVID-19 pandemic, with both older adults and people of color being the hardest hit populations. As Colorado’s aging population becomes more racially and ethnically diverse, there is a heightened need for policymakers and local organizations to address existing systemic and structural policies that have contributed to health inequities. While many of these policies cannot be undone overnight, increasing awareness about these barriers and how they negatively affect older Coloradans is a first step. Actionable next steps, such as increasing the practice of paired testing to identify housing discrimination, are imperative to ensuring that all Coloradans have the right to a healthy, long life.

Chrissy Esposito, who joined the Colorado Health Institute in May 2016, is a Policy Analyst.